The World’s 100 Most Powerful Women 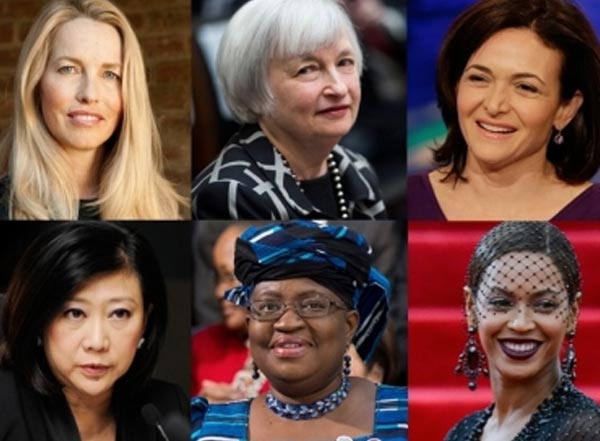 This is FORBES’ definitive annual guide to the extraordinary icons and leaders, groundbreakers and ceiling crashers who command the world stage.

In this snapshot of the 100 women with the most impact we showcase the top politicians, finance and business leaders, activist billionaires and celebrities who matter. In roughly equal measure you’ll find entrepreneurs and media mavens, technologists and philanthropists — all ranked by money, media momentum, spheres of influence and impact.

Power is a charged word that means more than political and economic might. Consider that less than 5% of the top companies have women CEOs. Slightly more than 10% of the 1,645 FORBES’ Worlds Billionaires 2014 are women. There are 14 incumbent female heads of state. We think differently. In addition to hammers-and-nails, we look to leaders whose tools are their global impact and influence.

The 2014 Most Powerful Women list features nine heads of state who run nations with a combined GDP of $11.1 trillion with 641 million citizens — including the No. 1 Power Woman, German Chancellor Angela Merkel. The 28 corporate CEOs control $1.7 trillion in annual revenues, and 18 of the women here founded their own companies or foundations, including our youngest self-made billionaire, Sara Blakely, 43. Speaking of, this year’s class has 13 billionaires valued in excess of $81 billion. The total social media footprint of all 100 Power Women exceeds 812 million followers/fans.

Hillary stays on: Clinton’s CV is chock full of firsts: The only first lady to become a U.S. senator turned viable presidential candidate turned secretary of state. Now a private citizen and cofounder of The Bill, Hillary & Chelsea Clinton Foundation, she continues to be one of the most watched-and-listened-to women on the planet. Bets are on that she will be the 2016 Democratic presidential candidate and, possibly, first woman elected to the Oval Office.

Women in tech: Technology takes a third turn as a category on the Power Women list. Seven tech women made the top 25 this year, including Facebook’s Sheryl Sandberg, Rometty, Marissa Mayer and HP’s Meg Whitman. There are 18 technologists in total, including Susan Wojcicki, newly-named CEO of YouTube, Cher Wang, cofounder of HTC, and Cisco’s CTO Padmasree Warrior.

The rising tide of female entrepreneurs: A remarkable number of women are founders or owners of their own enterprises, not a few of whose eponymous companies are synonymous with high fashion. Consider Miuccia Prada, Tory Burch and Diane von Furstenberg. Other self-made self-starters include Winfrey, Arianna Huffington, Chinese real estate tycoon Zhang Xin, and Kiran Mazumdar-Shaw, India’s first biotech entrepreneur.

Geographic diversity: More than half (58) of the women on the list are American, including immigrants such as von Furstenberg (Belgium), Power (Ireland), Weili Dai (China) and Warrior (India). Asia-Pacific citizens make the second strongest showing at 23. Latin America and the Middle East have five regionals on the list, and there are four Europeans and Africans with a slot. Nabiullina is the first Russian to make the list.

Climbing the rungs to power: Patience pays. Barra began her career with GM in 1980 as a General Motors Institute (Kettering University) student. Rometty started at IBM at age 24 as a systems engineer. Petrobras CEO Maria das Gracas Silva Foster clocked in 30 years at the Brazilian oil and gas behemoth. New head of State Bank of India Arundhati Bhattacharya began at the country’s largest lender in 1977.

It pays to play: The team spirit, ability to think on your feet and competitive drive of sports pays off in business. PepsiCo CEO Indra Nooyi played cricket in her native India. Mondelez CEO Irene Rosenfeld played college basketball at Cornell University. HP CEO Meg Whitman was a Princeton University squash and lacrosse player, while Beth Brooke-Marciniak was the first woman to receive a basketball scholarship at Purdue University. Dai played semi-pro basketball in China.

The new celebrity role models: Sure, they’re famous but they deserve special attention outside their day job. Oprah founded both Harpo Productions and The Oprah Winfrey Leadership Academy for Girls in South Africa. Joining the efforts of the U.N. are Angelina Jolie and Shakira. Newcomer Yao Chen was recently named the Refugee Agency’s Goodwill Ambassador in China, largely due to her macro-reach in social media. Entertainers making a mint as entrepreneurs include Beyonce, Sofia Vergara and Gisele Bundchen.

Healing, feeding and educating the world: If they’re not topping corporations or state, the women on our list are heads of major nonprofits and NGOs, and they wield huge budgets and impact millions, from Gates, Laurene Powell Jobs and Bloomberg’s Harris to World Food Programme Executive Director Ertharin Cousin and Harvard’s Faust. This year Facebook’s Sheryl Sandberg joined The Giving Pledge.

Same face, new job: Last year Mary Barra was a SVP at GM and today she is CEO. She lands at No. 7 and is the most powerful woman in corporate America. Google’s Wojcicki also saw a promotion this past year, moving from Google SVP to CEO of YouTube. Angela Ahrendts changed companies and sectors altogether, shifting from CEO of fashion trendsetter Burberry to a brand new position at Apple, SVP of retail and online stores.