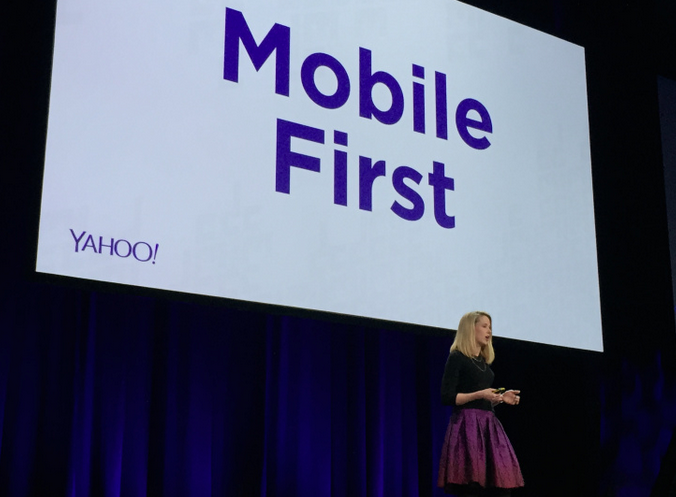 Today at Yahoo’s first mobile developer conference, the tech giant unveiled its new Yahoo Mobile Development Suite that combines Yahoo App Publishing for monetization, Search In Apps, and App Marketing with its Flurry Analytics acquisition made last year. This is Yahoo’s “ads in dev’s clothing” strategy to convince app makers to buy and host its ads.

Flurry now has 200,000 app developers on its platform who have built 630,000 apps that reach 1.6 billion devices. Yahoo meanwhile now has 575 million monthly mobile visitors to its properties and hit $1.2 billion in mobile revenue in 2014, as it predicted.

“Today is about building innovative, game-changing applications,” said CEO Marissa Mayer when she took the stage. Now, rather than just make them itself, Yahoo is providing the tools for developers to build, grow, and earn money on their own apps.

Following Mayer, Flurry CEO Simon Khalaf took the stage to give an update on the state of mobile. He says there are three big trends in mobile right now:

1. A massive rise in mobile shopping

Each piece of the Yahoo Mobile Development Suite is getting its own update as well as being tied together.

Flurry announced the new Flurry Explorer analytics tool, which an exec said is an “ad-hoc query analysis tool” that lets you “ask complex questions of your data and get the answer in seconds.” The product is free at any scale, which poises it to undercut Mixpanel, and analytics tool favorite around the industry that unfortunately can be quite expensive depending on how many in-app events are being measured.

Flurry is also launching Flurry Pulse, which lets developers securely share any of their data with their partners with ease. No additional code needs to be written. For example, mobile app publishers serving ads can send their mobile audience data directly to comScore (a Flurry Pulse launch partner).

Previously, developers would have had to integrate another comScore SDK into their apps. This shrinks app size, increases app stability thanks to minimizing code, and removes the need for extra updates. Yahoo plans to add additional partners to Flurry Pulse soon, and is now in developer preview and will roll out over the coming weeks and months.

Now through the Flurry SDK, developers can integrate Yahoo’s Gemini native ads that fit into different app feeds, whether they’re vertical streams, or horizontal cards. No matter what an app looks like, Yahoo’s Gemini system can morph standard ads to match the app’s design.

Last year Yahoo acquired video adtech startup BrightRoll. Now developers can pipe BrightRoll ads into their apps through the Flurry SDK. So if an app features video content, they can easily monetize it without their own sales force through BrightRoll. “Isn’t this great? Grumpy Cat and Big Macs in your app, and you make money from it,” said Yahoo Senior Director of Product Management James Kelm.

Developers don’t want users bouncing from their apps when they need to run a web search. So today Yahoo launched Yahoo Search In Apps, an integratable search tool for mobile apps. The idea is that not only will users stick around in a developer’s app if they can search from there, but the developer can share in the ad revenue if users click on search ads.

Yahoo Native AdsYahoo is tying together its three mobile advertising options for developers: Gemini native ads on Yahoo’s properties, video ads on third parties, and Sponsored Post social ads on Tumblr. Now developers can target ads in any of these channels using Yahoo’s identity data with a self-serve tool. That includes what people browse on Yahoo and Tumblr, and what they do across the web thanks to Flurry’s big footprint.

Overall, Yahoo’s platform is a smart play because it dangles free analytics and monetization tools to lure developers towards its advertising products. Investors gave Yahoo a small 1.42 percent bump today as of 3:15 p.m. EST thanks to the launches. This “PlADform Strategy” is what I wrote Facebook and Twitter were aggressively developing last year.

Hence, Yahoo’s new platform will put it into more direct competition with Facebook and Twitter, which also offer analytics, advertising and monetization tools. Developers will be looking for which platform has ads that deliver the most valuable users, pays them the most for hosting their ads, and gives them the best understanding on what’s going on in their apps through analytics. Expect Facebook to improve its offerings in these next month at its f8 developer conference.

In a press conference after the keynote, Mayer referred to the suite as creating a “virtuous cycle” that helps developers at all stages of their app’s lifespan. “You start with people that build great products, products lead to traffic, traffic leads to revenue, and you can reinvest that.” That’s quite similar to the Build-Grow-Monetize loop Facebook talks about with its platform.

Marissa Mayer Press ConferenceWhen I asked how Yahoo will nudge developers along the cycle, Mayer said it happens naturally as once someone builds a product, they want to make it better, grow it, and earn money from it. It’s the last two phases where Yahoo makes money, so getting devs there is critical.

Khalaf noted that “Our largest competitor was Sand Hill Road. They were giving money to developers and not asking them to monetize.” Venture capitalists just wanted growth now and revenue later, but Khalaf says that’s changed now, led by mobile games and big platforms like Facebook making big bucks on the small screen. Monetization is being baked into the app experience, so developers are thinking about it earlier.

Yahoo’s SVP Of Mobile Adam Cahan tells me that with that focus from the start, developers are realizing “a sales organization is an expensive beast.” They’d rather outsource it to platforms like Yahoo. Also, Cahan says “the ads suck less” thanks to new native formats and targeting, so devs are less weary to build them in. And Flurry Chief Product Officer Prashant Fuloria the parts of the cycle have synergies. Flurry analytics can teach developers who their users are so they can sell demographics to Yahoo’s advertisers, and onboard more like them through Yahoo App Marketing.